The Behemoth's cooperative puzzle platformer puts on a performance at this year's show.

The Behemoth, the creator of Alien Hominid and Castle Crashers, had a few gigantic arcade-style units on hand in its booth to show off its upcoming Xbox Live Arcade game, BattleBlock Theater--a 2D platformer and a cooperative puzzle game blended together to create an experience that challenges your brain and tests your restraint. Upon starting our two-player demo, we were thrown into an area that gave us a chance to become familiar with the controls, which are pretty straightforward. Both characters had a jump, a melee punch move, and a throw that could be used to propel a teammate across an environmental hazard (or throw him into it). But more importantly, these characters both had a special ability--one had a fan that could blow a teammate around, while the other could fire darts that stick to walls, creating a temporary platform to jump onto and advance across within the level. At various points in a level, you will also find special items, such as rocket packs, that will help you progress to or reach previously inaccessible areas.

While we quickly became familiar with the controls, we stayed in the open areas for a few extra minutes, interacting with each other via punches and throws that can be used to either help or hinder. It was at that moment that we realized strict cooperation might be too tall an order for us to make any significant progress, but we pressed on and into the first real level nonetheless. It was here that we got our first taste of the platforming elements of BattleBlock Theater as we navigated around, jumping from platform to platform, finding and grabbing green crystals around the level before proceeding to the exit.

Each succeeding level presented more platforming puzzle challenges. Some took the form of exploding blocks. Others appeared as blocks that either player could move at the risk of discharging a massive bolt of electricity that could instantly fry either player. There was even an instance when we had to make careful use of the throwing ability and position ourselves in just a way that one player could safely make it to the other side. But perhaps the most memorable moment occurred when some horrible beast was guarding the only exit through a platform that was triggered by a pressure plate on the same platform. Unfortunately, one of us knew what had to be done--a brave sacrifice that involved being devoured by the creature while standing on the pressure plate so that our teammate could safely move ahead.

Still, it's worth mentioning that the penalty for death at this point isn't all that severe. There were more than a few moments spent throwing each other into various hazards, whether it was water or some of the enemies that loiter about, just because it was fun. But again, at some point, you kind of have to work together. We only scratched the surface of what BattleBlock Theater has to offer, but the amount we played gave us a pretty decent glimpse into a game that makes it as much fun to cause trouble as it is satisfying to cooperate. We'll have more on BattleBlock Theater before its release on Xbox Live Arcade. 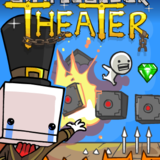