We pit fierce dinosaurs against each other in combat. SPOILER WARNING: They all end up dead.

Of all the games on display at Nintendo's 3DS press event in New York City, there was one that walked up to the childhood memory gong and rang it loud and clear. No, it wasn't the newest incarnation of a beloved video game hero, or even a straight port of a long-dormant adventure. It was the one that vividly called to mind the fond childhood memory of taking two dinosaur toys, one in each hand, and then smashing them together while roaring at the top of our lungs. In Combat of Giants: Dinosaurs 3D, we once again took on the role of a mighty lizard engaged in a fight to the death, only this time it had way better graphics.

Who's Making It: Ubisoft is publishing the game and is proud of both the visual fidelity and the abundance of dinosaur facts it hopes will feed the dinosaur fever that most people contract for at least some of their childhood.

What It Looks Like: From our time with the short demo, it seems that Ubisoft's pride is not misplaced. The dinosaurs move with lively and realistic gaits, and the animation is so solid that you'll have no trouble believing that this is what dinosaurs looked like when they walked. The combat attacks get a little more outlandish, but we didn't see any spinning piledrivers or projectiles, indicating that Combat of Giants is not going off the deep end with the dinosaurs' movesets. The environments were fairly vibrant and detailed, reinforcing the realistic look.

How It Uses 3D: The character models themselves are the biggest beneficiary of the 3DS's unique capabilities. These animated creatures have some length and weight to them. The tips of their tails swing in the foreground, while their bodies seem to extend through the three-dimensional space to their heads bobbing down the path. The linear sections in which you control the dinosaur from behind are a particular standout, but the dinos still look good during combat sequences.

What You Do: After some pre-extinction events, the balance of power among the four groups of dinosaurs shifts into the claws of the evil Arkosaurus. You choose a dinosaur from one of the groups and embark on a quest to become the chief dino and challenge the bad guy. The groups (and some of their members) are predators (Tyrannosaurus, Carnotaurus, Baryonyx, Allosaurus, Ceratosaurus), hunters (Velociraptor, Oviraptor, Ornitholestes, Troodon), defenders (Ankylosaurus, Euoplocephalus, Stegosaurus, Edmontia), and chargers (Triceratops, Styracosaurus, Einiosaurus, Chasmosaurus). You can then customize your dino's skin or don any costumes you've unlocked. The one costume we saw in action made the dinosaur look like its own skeleton. It animated like something out of Night at the Museum, and it looked like it was an actual animated skeleton, not merely a reskinned dinosaur wearing a skeleton costume. Once your customization is complete, you travel linear pathways through one of the few environments (such as jungle, volcano, or desert), smashing piles of bones and rocks to proceed and collecting items that you find. These items can be used to bolster your dino's stats or to unlock fun facts and other bonus content.

Once you come upon a combative dinosaur, a fight begins. The battlefield is a long, narrow area that is viewed from an offset angle to make it appear as if it is slanting off into the background. You can strike the other dinosaur to cause significant damage or push it to cause some damage and force it back a few steps. Depleting your opponent's health bar or causing it to ring out results in victory. You also have to dodge your enemies' attacks by learning their pattern or by just moving out of the way when they flash red. If you manage to hit them while they flash blue in a moment of vulnerability, you can earn a powerful dino strike, which is a flashy super attack that hits for big damage.

There is no head-to-head multiplayer, but Combat of Giants does use the 3DS's Street Pass to pit your chosen dino against any others you may encounter while out and about. Everyone involved in these passive fights ends up with loot, but the winner's haul is significantly better. You can also trade items with friends wirelessly.

How It Plays: You use the analog circle pad to maneuver through the linear environments and then use the pad and various buttons with good timing to acquit yourself well in combat. While we appreciated how the motion ranged from plodding to prancing, depending on the creature, we longed for a more open area to explore. You can turn around on the path to backtrack, but even the most nimble dinosaurs don't take tight turns very well.

What We Say: Despite the fact that you know it'll all end in massive extinction, steering the impressively animated dinosaurs through the rich environments is quite satisfying. Combat didn't get terribly complex during our demo, but it covered only the very early going. With lively dinosaurs and a bevy of facts available, Combat of Giants: Dinosaurs 3D certainly seems poised to capture the imagination of young folks when it becomes available during the Nintendo 3DS's launch window (between March 27 and June 7). 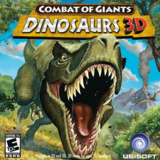