In the seminal 1970 crime thriller Dirty Harry, Clint Eastwood uttered one of his signature lines. "Do you feel lucky?" he asked a wounded bank robber looking down the barrel of his possibly empty .44 magnum revolver. "Well, do ya, punk?"

Today came word that the developer of the Dirty Harry game is feeling very unlucky indeed. This afternoon, GameSpot received word that The Collective, a division of Foundation 9 Entertainment, is no longer working on the adaptation of the seminal Warner Bros. film. According to a source close to Foundation 9, approximately 30 Collective staffers were handed pink slips today after the studio was summarily pulled off the project.

Though a Foundation 9 spokesperson declined to comment on Dirty Harry's status, she did say an effort to "optimize" its suite of internal studios had led to staffing changes. "When this optimization leads to job loss at one studio, we make every effort to find a place for displaced employees at another of our studios," said the rep. "Foundation 9 is currently hiring for 40 positions in our studios across North America and is still in a state of growth with more than 30 projects in development."

The aforementioned source also told GameSpot the Warner Bros. Interactive Entertainment team managing the project had "been dissolved." However, newly installed WBIE senior vice president Samantha Ryan appeared to have a strong hand on the helm, proclaiming that a Dirty Harry game will be released...eventually.

"We are moving forward with the Dirty Harry next generation videogames and will be changing our development plans in keeping with the best interest of the franchise legacy," Ryan said in a statement. "WBIE is dedicated to creating a game that will bring Clint Eastwood's legendary Detective Harry Callahan character to the interactive space with a new story and great gameplay."

Ryan's other job as CEO of WBIE-owned Monolith Productions (F.E.A.R., Condemned) raises the prospect that her studio may take up the reins of Dirty Harry development. A source close to WBIE did confirm that the game is "transitioning" to another shop but did not disclose where the project was going. 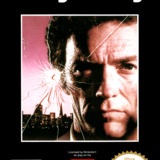