Codemasters releases a playable demo of the upcoming PC version of its latest rally driving game. New screens inside.

Codemasters has today released a playable demo of Colin McRae Rally 3 for the PC on its official Web site. The demo, which weighs in at around 120MB, allows players to take control of McRae's Ford Focus RS and race three challenging stages in the UK, Japan, and Sweden.

The Xbox and PlayStation 2 versions of Colin McRae Rally 3 are already available in stores, but the PC version isn't scheduled for release until June. For more information, check out our previous coverage of the game. 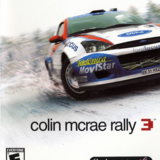