We unearth some new details about Ubisoft's upcoming action game with a horrific twist.

Action games with a horror twist have long been a gaming staple. The ability to take charge in a situation that appears to be destined to have a most unpleasant end for your character has always held a pretty strong appeal. Cold Fear is Ubisoft and developer Darkworks' attempt to offer their own unique spin on the time-honored formula. Fans of the Alone in the Dark franchise will remember Darkworks as the developers behind Alone in the Dark: The New Nightmare, the fourth entry in the series. While Ubi is still keeping mum on the specifics of the game, we've been able to dig up a bit more info on the story as well as some new assets.

The game's story will revolve around an investigation into--wait for it--mysterious deaths that are heavy on the gore. Two locations have been singled out so far: a drilling platform in the Bering Sea, and an abandoned whaling ship found adrift in US waters off Alaska. The platform, called the Star of Sakhalin, hasn't seen much use, as it only produced oil for a short time. Mysterious activities on the platform caught the attention of the CIA, who paid special attention to a whaling ship that regularly docked at the platform. When the game begins, the ship is spotted drifting in the ocean. CIA special agent Bennet is sent to investigate, tapping a team from the US Coast Guard to help search the ship. The mission is complicated by a storm blowing in, which makes boarding the whaler hazardous and investigating the ship even more fun.

You'll play as a member of the Coast Guard team, Tom Hansen, who, for better or for worse, is assigned to check out the starboard side of the main deck, which separates him from the group. This ends up working out pretty well for Tom, as the rest of the boarding party is summarily massacred by an unseen force, leaving him the lone survivor. Your goal, aside from staying alive and getting off the whaler, is to find out what killed everyone. Expect to discover plot twists, enemies that may not be human, and conspiracies aplenty on your journey to discover the truth.

Cold Fear is currently slated to ship March 2005 for the PC, PlayStation 2, and Xbox. Look for more on the game in the coming months. 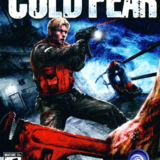