The Canadian developer announces that it's working on a turn-based online strategy game set in a fictional universe. First screens inside.

Canadian developer Codeco has announced that it is currently working on StarShift: The Zaran Legacy, a turn-based online strategy game in which nine different races try to conquer the galaxy.

"We are only beginning to get involved on the PC game market, but we are convinced that the public will be able to see the originality and depth of the concept behind StarShift," said Stephane Vaillancourt, Codeco founder and StarShift project director. "Being a small autonomous team rather than a multinational leaves us much freedom as for the contents of the game. As a matter of fact, almost everything is allowed in the game, from corrupting your enemies to being treacherous with your allies in order to assimilate their technology. StarShift is the kind of game which seems simple at first glance, but which offers a whole universe of possibilities to explore."

After choosing one of the nine races available in the game, players will attempt to conquer the galaxy using a mixture of direct attacks, espionage, sabotage, and diplomacy. At their disposal will be more than 30 different technologies, 20 special-ops options, five diplomatic treaties, and numerous building and unit types. It's not known at this point how the various species and their respective technologies will differ.

StarShift: The Zaran Legacy is due for release in Q1 2003. According to the game's official site, it will be released as a paid-for download rather than through stores. Codeco is currently accepting applications for the StarShift beta test on the site. We'll post more information as it becomes available. 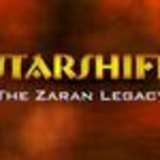