Game Factory shows off a near-finished version of its upcoming Code Lyoko action game for the Wii.

Earlier this week, during a meeting with Game Factory, we were invited to spend some time with a preview build of Code Lyoko: Quest for Infinity. Developed exclusively for the Nintendo Wii by Neko Entertainment, Quest for Infinity is an action game in which you'll assume the roles of four of Code Lyoko's key characters as they attempt to save the world from the evil Xana. For the benefit of those of you who follow the animated series, we're told that the storyline is new but that it is closely connected to the events of the show's fourth season.

As we reported from Game Factory's Santa Monica office earlier this year, portions of Quest for Infinity are quite closely based on the Code Lyoko Nintendo DS game that was released in May. We're pleased to report that said levels appear to have been cleaned up quite significantly since we last saw the game, and the "space shooter" levels that we were told about back in July have now been implemented.

Code Lyoko: Quest for Infinity's environments will feature six distinct sectors with the following themes: ice, forest, desert, mountain, volcano, and the futuristic-looking and very blue Sector 5. Your time in each area will include visits to both real and replica versions of the sector in question with different level designs, and you'll travel between the two in shoot 'em-up sequences that take place in the Digital Sea. The gameplay in the shooter sequences is reminiscent of Rez, in that your "Skid" craft has the ability to lock on to multiple enemy targets before firing on them. You control both your craft and your onscreen crosshair simply by moving the Wii Remote, and the action was surprisingly intuitive. The fact that some of the enemies were vulnerable only when hit head-on kept things challenging.

In fact, those of you expecting an easy ride from Code Lyoko: Quest for Infinity might be in for something of a surprise, at least based on what we saw of the game today. Sure, it might not be difficult to figure out which playable character you need to use for particular tasks and puzzles, but enemies generally attack in numbers, and the cel-shaded boss we were pitted against today survived all three of our attempts to take it down.

Code Lyoko: Quest for Infinity is currently scheduled for release in November. 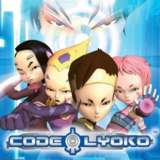