From now until April 1, the cult-favorite FPS is available as a free download on the GOG online store.

Starting today, the classic FPS XIII is free to download and own forever on GOG until April 1. Developed by Ubisoft, XIII is a stealth-action FPS with a cell-shaded art-style that has a cult-following in the years since its release. In order to snag this game, you'll need a GOG account and log into the site or the GOG Galaxy client. The special deal will end on April 1 at 6 AM PT / 9 AM ET, so be sure to grab your copy of the game when you have the chance.

Originally released in 2003, the FPS was a modern adaptation of the original Belgian graphical novel from 1984, which saw a mysterious operative with amnesia try to piece together his past. In the years since its release, XIII has become a cult-favorite due to its involved story and striking cel-shaded visuals that paid tribute to its comic origins. While XIII recently had a remaster that attempted to update the story and visuals, it ended up releasing to mixed response from fans and critics alike. Still, the original XIII holds up quite well, and you can now download the game at no cost.

Right now, GOG has a number of deals on games for the ongoing Spring Sale. Though they're not free like XIII, there are several titles that are on sale for a steep discount right now:

We also have a roundup of other deals online right now, which includes the discounted launch of Kingdom Hearts 3 on the Epic Games Store, and Best Buy's current deal on Bravely Default II. Also, be sure to check out our round up of PC games on sale now. 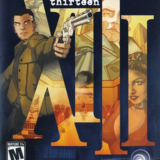