Bad Mr. Frosty and company are making a comeback.

Much of Interplay's recent work has been in simple re-releases of classic games; last year it brought games like Descent 3 and Freespace 2 to Steam. Now it's announced plans to go even further with its efforts to bring one of its classic games--ClayFighter--to modern platforms.

Along with Drip Drop Games, Interplay is working to remaster ClayFighter, the classic fighting game that Interplay published way back in 1993 on SNES and 1994 on Genesis. As you'd expect, this enhanced version will feature overhauled visuals and audio, although Interplay didn't offer any sampling of what it will look or sound like.

Gameplay will also be tweaked. At the very least, new mechanics are being introduced, such as double jumping, counters, reversals, and air dashing. The roster will total more than 20 fighters, including the likes of Bad Mr. Frosty and Boogerman.

ClayFighter is one of the earliest games developed by Visual Concepts, the developer now best known for its work on the NBA 2K series. It features claymation-style visuals and was a clear response to 1992's hit Mortal Kombat; a ClayFighter sequel even included MK Fatality-esque "Claytality" finishers.

The remastered version of Clayfighter is due out on PC sometime in 2016. You can get a look at the original in the YouTube clip below. 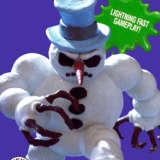