Shafer will initially slot in on the Elemental: War of Magic team, according to Big Download's report, aiding design and amping up mod support for the critically panned turn-based strategy title. Into the future, the veteran designer will be given command of his own team within Stardock to create an as-yet-unannounced new title.

The former Civ V lead isn't the only notable hire announced by Stardock today. The Michigan game developer also said that it picked up sci-fi writer/editor Dave Stern to oversee creative storytelling and lore implementation for all future projects, including Elemental. Stern's more notable works include novelizations for Lara Croft: Tomb Raider and The Blair Witch Project. He has also previously collaborated with Stardock on the Hiergamenon lore book found in the Elemental: War of Magic Limited Edition.

For more on Shafer and Stern's current project, check out GameSpot's previous coverage of Elemental: War of Magic. 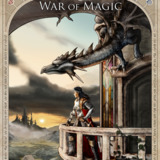