Takashi Tokita would also settle for a movie of the classic Square Enix RPG.

Chrono Trigger director Takashi Tokita has said he'd like to see Square Enix bring the critically acclaimed RPG back in some form.

Speaking to Game Informer, Tokita said Chrono Trigger, which is considered to be one of the best RPGs of all time, was special because it united two beloved franchises, Dragon Quest and Final Fantasy.

"It's probably considered sacred since the companies merged," he said. "It was essentially a dream mix between Final Fantasy and Dragon Quest; creating or exceeding what it was in its original form is a very difficult feat."

Reflecting on its development, Tokita said the development team reached "a couple hundred" people at the same time, including many developers that would go on to define the Final Fantasy franchise.

"It was kind of like a grand festival--it was really fun. [Final Fantasy designer and artist Tetsuya] Nomura was actually creating the environment background pieces in Chrono Trigger--like the courthouse scene, that was created by him."

Tokida added that, ideally, he'd like to see a "high-quality, high-end" version of Chrono Trigger, a "movie production, or something of the sort."

Square Enix has confirmed Final Fantasy 15's release date as September 30. It is also re-making Final Fantasy 7, which will reportedly be delivered in multiple instalments. 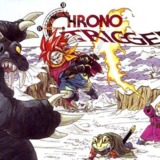