We get a hands-on look at Techland's futuristic first-person shooter.

If you've been wondering where all those games are that fulfill the promise of tech demos with superhigh-polygon-count landscapes full of lush vegetation, you might be happy to hear that Chrome is just around the corner. We heard early on how Poland-based developer Techland designed the futuristic first-person shooter from the ground up to handle expansive, dense jungle environments that might contain 100,000 polygons in a single frame without killing the frame rate on a modest PC. So now that we have an early version of the game in hand, it's not surprising that Chrome features some decent visuals, particularly when it comes to postcard-perfect vistas.

Despite its familiar premise of playing as a mercenary in a sci-fi universe, Chrome isn't just a generic shooter. Logan, the ex-military mercenary you play as, has the ability to augment his own body with different kinds of advanced nanotechnology implants that can improve his skills. Each mission starts out with an in-game cutscene, then transitions to a screen that lets you choose your loadout for the mission from a selection of weapons, ammo, and items. The inventory system is as reminiscent of Deus Ex as the implants, and after a firefight dies down you'll have to search the various bodies and juggle items in your own inventory screen to make things fit. Fortunately, the paper-doll inventory won't slow you down when you need to quickly switch weapons, as specific weapon types are bound to the number keys and can be drawn whether they've been specifically equipped or not.

To kick the story off and teach you the interface, Chrome has a prologue mission in which you follow the orders of a long-standing teammate. As you wander through the dense foliage, he'll helpfully point out where to expect enemies and eventually has you stand guard in a sniper tower while he infiltrates an enemy installation. But don't worry about having to take direct orders throughout the game, because a plot twist soon results in your heading out on missions solo, with just some helpful guidance of an ally who stays on board your orbiting ship.

Chrome's environments truly are expansive, and you'll have to take some time to plan things out so you can use the terrain to your advantage and don't spend too long hiking around the big maps. Another challenge in the jungle locations is simply to see enemies before they see you. Fortunately, you'll have access to items that can help you with this challenge, including the binoculars and sniper scope, which have a handy lock-on feature when the reticule passes over an enemy that identifies the enemy and specifies the distance. While the half-dozen missions we played featured mostly green temperate and tropical locales, you can expect to see other environments in the final game, including open, arid lands. And you'll see your share of close combat as well, as missions generally have some sprawling base installations with indoor locations to infiltrate and clear.

The final game will have quite a variety of weapons, including a number of conventional, modern-day firearms gussied up with futuristic additions. Small arms like pistols and submachine guns have an alternate fire mode that brings the gun up to steady your aim while slowing down your movement. This is actually quite useful, since without the accuracy-boosting implant installed, it can otherwise be difficult to hit enemies at medium distances. The assault and sniper rifles are quite formidable whether they're in your hands or the enemy's, and they deal out good damage at a decent range. In fact, the enemies seemed quite challenging in the version we played, because while it's easy enough to use a regenerating health pack to restore your health over time, enemies can deal out a lot of damage all at once. Going up against multiple opponents demands good use of cover--or grenades.

The most intriguing features of Chrome seem to be this challenging style of gameplay and the game's high-poly graphics. Publisher Strategy First has been working with Techland to refine the game for the North American audience since it acquired the publishing rights several months ago. The alpha version of the game we played seemed a little rough around the edges, but the game is expected to hit beta at the end of the month. We'll see more of Chrome when it ships this summer. 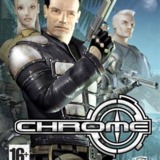