Chou Aniki sequel to be released on PlayStation 2

A sequel to the unique shooter is in development at Global A. Entertainment.

According to the latest release of Famitsu magazine, Global A. Entertainment has announced a sequel to the Chou Aniki shooting game series. Scheduled for release on the PlayStation 2, the game will be titled Chou Aniki: Sei Naru Protein Densetsu. In English, the title translates to Mighty Brothers: The Legend of the Holy Protein.

In Chou Aniki: Sei Naru Protein Densetsu, the player's objective is to guide a legendary glob of protein to holy lands through groups of enemies that are aiming for the protein to get the ultimate physique. Following the tradition of the series, the two main characters are muscular body builders that wear thongs and shoot beams from the top of their heads. The glob of protein and the body builders can among between four different battle formations when flying through the stages. By taking protein capsules that appear after defeating enemies, the body builders can power up to shoot stronger attacks. By rotating the right analog stick and powering up, the player can shoot a powerful laser beam. There are also bombs that can damage all the enemies onscreen. 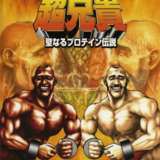