Xicat Interactive announces that it's currently adding the finishing touches to its helicopter rescue game. New screens inside.

Xicat Interactive has today announced that ChopLifter: Crisis Shield is almost finished and is on target to make its April 29 release date (June in Europe). New gameplay details have also been released today, including the fact that the game will feature unpredictable weather conditions to make the various rescue missions even more challenging.

"ChopLifter is a great remake of one of gaming's best-selling and most popular franchises," said Don Zabriskie, head producer at Xicat Interactive. "We've taken the original premise of the game (a rescue chopper saving lives) and added every bell and whistle you could possibly want. It's an amazingly real and very addictive game."

ChopLifter: Crisis Shield is a remake of the original arcade game ChopLifter, and it will see players attempting to carry out 10 daring rescue missions including a hotel fire, an erupting volcano, a raging flood, a mountaintop plane crash, an air-sea ship rescue, and a bomb scare on a speeding bus. Before attempting to complete the missions, players will be able to master the art of flying a helicopter in the game's training mode, which culminates in the awarding of a rescue pilot's license. The game will feature a total of six realistic-handling choppers, ranging from civilian models to those used by the military. Depending on the mission being played, the player's chopper will be kitted out with appropriate equipment including an intercom system, a high-pressure water cannon, a winch operator, and the like.

For more information on ChopLifter: Crisis Shield, check out our previous coverage of the game. 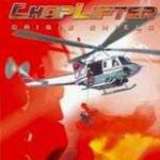