The cool-looking 3D platformer received a release window, as well.

It seems like we're in the midst of a 3D platformer resurgence. Both remasters of classics and new entries in the genre have been frequent last year and this year, with games like Snake Pass, Yooka-Laylee, and the Crash Bandicoot N-Sane Trilogy headlining the trend. A Hat in Time is another 3D platformer that's on the horizon, and today its developer released a hilarious new trailer showing off a bit of the game.

The trailer features some pretty funny narration and shows off the game's beautiful art style. In addition, it reveals a new murder mystery story arc, with the main character following clues and questioning NPCs to determine what happened aboard a train. Check out the trailer below:

I'm particularly interested in A Hat in Time because developer Gears for Breakfast appears to be emphasizing the adventure aspect of the game alongside its platforming. The game will feature 5 story chapters, each split into acts. You'll be able to select which act to play, and the acts will have different environments.

In addition, the studio says on its website that the game will feature "giant, open worlds" and cooperative multiplayer.

Gears for Breakfast also announced today that A Hat in Time will launch on PC this fall. It was successfully Kickstarted way back in May 2013, making almost $300,000. 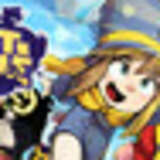