MLB rookie Eric Jokisch did not get the memo that the Year of Luigi is over. The Chicago Cubs pitcher talked to media after a 10-4 loss Sunday night wearing a Luigi costume, joking with reporters (via Yahoo Sports) that, "This is a normal outfit for me. I like going as Luigi."

Jokisch made his MLB debut Sunday evening against the Pittsburgh Pirates, giving up one run on six hits and striking out four in four-and-a-third innings of relief. Jokisch wasn't wearing the Luigi costume for style, but rather as part of an annual hazing campaign that sees rookies wear embarrassing clothing when speaking to reporters.

Other Chicago Cubs rookies wore costumes for characters like Mario and Princess Leia from Star Wars, as well as various superheroes, including Super Man, Spider-Man, and Batman. 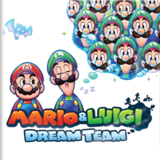