Sony Online Entertainment (SOE) has today announced the North American release of Champions of Norrath for the PlayStation 2. Set in the popular EverQuest universe, Champions of Norrath is an action role-playing game in which up to four players journey into the wilds of Norrath to save the land from a gathering army of evil.

"We believe that Champions of Norrath is one of the greatest action RPGs the PlayStation 2 has ever seen," said Don Vercelli, senior vice president of sales and marketing at SOE. "No other game in the genre can match the features that Champions of Norrath offers, with up to 70 hours of gameplay per character, randomly generated dungeons, online and offline cooperative multiplayer adventuring, both voice and keyboard chat, and an amazing graphics engine. We're very proud of the game, and we think that players are going to love it."

For more information on Champions of Norrath, check out our previous coverage of the game. 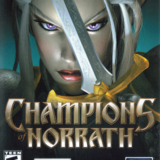