We crash and burn in SOE's conversion of Midway's arcade racer.

LAS VEGAS--We had the chance to play Championship Sprint, one of the Midway titles Sony Online Entertainment is converting to the PlayStation 3 with Digital Eclipse, at CES today. The game converts the late-'80s update of the old-school Sprint series that enhanced the arcade racer's gameplay with the ability to upgrade your vehicle. We were able to try out a work-in-progress version of the game to see how it's coming together.

The game looked and played just about how we remember it. Though the control is solid, we do miss the wheel from the arcade cabinet. Steering takes some getting used to, but it's not too bad once you get over the learning curve. Though the visuals are looking spot on with the original game, it would have been nice to see an option for upgraded graphics. Besides what's looking like a good conversion of the original arcade game, SOE and Digital Eclipse are making additions to the experience. The game will support 720p and feature online multiplayer, as well as online leaderboards.

So far, Championship Sprint is looking like a solid conversion of the arcade game. The control is tricky but manageable at this point, but we're hoping that it will be tightened up. We're also curious about the standard selection of unknowns for SOE's retro titles, such as how it plays online and how much it will cost. Hopefully Sony will shed some light on the price when it becomes available soon. Championship Sprint is currently slated to be available in the PlayStation's online store in the early part of this year. Look for more on the game in the coming months. 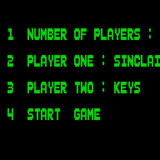