Castlevania is going online in Portrait of Ruin for the Nintendo DS, and we checked out the new multiplayer features.

Konami recently stopped by with a near-final version of its upcoming Nintendo DS game, Castlevania: Portrait of Ruin. We've taken a look at the game a couple of times in the past and spilled the beans on features, such as the two-characters-at-the-same-time gameplay, the inclusion of mini-levels in the demonic portraits that are scattered around Dracula's castle, and the appearance of optional missions, which are given to you by the spectral wind character who's bound to the castle. We haven't, however, said much about the game's online components...until now.

With the appearance of two characters in the main game, you may have been hoping for full cooperative play with two players in the game's story mode, but unfortunately that doesn't happen in Portrait of Ruin. However, fans of co-op play will be happy to note that it is in the game in one form: as a part of the boss-rush mode. Fans of Castlevania: Dawn of Sorrow will remember boss-rush mode as a kind of time-attack mode that had you take on all of the game's bosses at once as you attempted to race against the clock, with lower times earning better prizes that could then be carried over to the single-player game. Well, the single-player boss-rush mode is back in action, and it lets you control both Jonathan and Charlotte, the game's protagonists, as they take on all the baddies in their way. Also, there are now multiple boss-rush modes, three in all, with a different assortment of bosses and rewards for each.

The game's Wi-Fi Internet access can be used to play boss rush online with a friend. Because you'll be playing at the same time as someone else, it would be difficult to let either player pause the game for reequips, so the cooperative version of boss rush simply has pausing disabled; when you hop online, the game will pull your equipment from the saved game of your choice, and you'll be stuck with that until you complete the boss-rush mode. (You can still pause all you like in the single-player boss-rush mode, so the days of pausing and changing all your equipment every few seconds are still alive and kicking for the strategists out there.) Because some of the bosses in the game take advantage of the independently moving characters, it'll be interesting to see if a pair of skilled players can post lower times than the single-player masters. Luckily, you'll be able to know as soon as you access the online version of the game because your scores will be uploaded and added to a global leaderboard, letting you see the best pair of Castlevania players.

You'll be given plenty of incentives to hop online, not only because of the leaderboards, but because each of the online boss-rush modes offer different special items for completing them within a set period of time. These special items will then be added to your single-player saves, so it's possible that you might be able to ride on the coattails of a powerful friend and get some decent items for your character early on in the single-player game. Or, if you've saved up some cash, you can do the same thing with the online shop mode. In shop mode, you can set up your game to access the Internet and list items that you want to sell from your inventory. When someone connects to your shop, that player will be able to fork over the dough to you and buy your items. Here's the thing, though: You get the cash, but you don't lose the item. So if you find an ultra-rare sword and want to offer it up online, you could sell it a few dozen times if you want; it'll still be there in your inventory when you're done.

One of the drawbacks of shop mode is that you have to be actively engaged in online trading to sell or buy wares; you can't access the shop or sell goods while you're playing the game. That said, if you want to leave your DS hooked up to the Internet while it's charging, you can conceivably stay in shop mode overnight and let players connect to you and buy whatever they need. Alternately, whenever you want to save your game in the single-player mode, you can do so, hop out to shop mode, load up on goodies, and pick up right where you left off in the game. This should be helpful to players who've fought their way to a boss, then realized that they were running low on potions and had to run all the way back to the game's shopkeepers.

Although we're definitely going to miss the compulsive soul-collecting feature found in Dawn of Sorrow, Konami seems to be adding some intriguing new features to its second Castlevania game for the Nintendo DS. We even hear word of some unlockable playable characters. However, you'll probably have to play the game for yourself to get the details on that stuff. But you won't have to wait long, because Portrait of Ruin is currently scheduled to ship in early December. 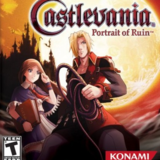