The newly announced indie game takes a familiar format and shakes it up.

Cassette Beasts is an indie open-world RPG, where characters can transform into unique monsters using cassette tapes. While on paper the concept sounds a little weird, the trailer will absolutely sell it for you.

The Pokemon-esque RPG also has a fusion feature, where you can fuse any two monsters to come up with unique, more powerful forms. While never in the actual Pokemon canon (aside from one instance in Sun & Moon), this concept went viral thanks to the Pokemon Fusion website, which automatically creates a new Pokemon from a combination of two existing ones.

With monsters appearing as transformations rather than individual creatures, the player's relationships with different characters will also play a role in their combat success.

With cute retro graphics (which honestly were a given in any game using cassette tapes as a main feature) and what promises to be a banging soundtrack, Cassette Beasts is one to keep on your watchlist. You can wishlist on its Steam page here. A Nintendo Switch version of the game is also pending.

The game is developed by two-person UK indie Bytten Studio. Its last release was a procedurally generated Zelda-style RPG called Lenna's Inception, while the devs have previously worked on games like Stardew Valley, Starbound and Wargroove. 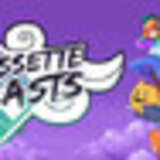