Cash Carnage Chaos definitely has cash. But does it have both carnage and chaos? We find out at Sony's Gamers' Day 2006.

Cash Carnage Chaos is one of the recently released names of downloadable titles for the PS3. This high-energy arcade game was playable at Sony's recent Gamers' Day, and we sat down and played a couple of rounds to see what all the fuss was about.

Two words will pop into most people's minds the second they play Cash Carnage Chaos for the first time: Smash TV. The 360's Xbox Live Arcade has plenty of games inspired by Smash TV, a top-down-perspective game where you move your character with the left joystick and pick a direction to fire with the right joystick; it features the original Smash TV, as well. These controls are naturally easy to emulate with the dual analog sticks on most modern game controllers and are used in games like Geometry Wars and Mutant Storm Reloaded on Live Arcade.

Cash Carnage Chaos seems to be a more direct homage to the original, though, in that not only the controls are emulated, but the settings are, as well. As in Smash TV, you're a contestant in a blood-soaked game show, attempting to rack up cash money to boost your score and pick up power-ups and gifts that are thrown down onto you as you avoid enemies while attempting to shoot them.

The main plot here (we're told there will be such niceties as cutscenes and boss battles) revolves around an alien civilization that's been approaching Earth for some time. Due to speed-of-light issues, all of their knowledge of our civilization is based on television shows of the 70s and 80s, so when your character is abducted and forced to fight through the various levels of the game, you'll be inundated with cash and prizes. Most enemies will simply drop a wad of cash when killed, but sometimes presents will drop, which range from fur coats to radio sets to lawn mowers. Presents are worth more cash, and since cash is your score and you have to get your score as high as possible to move on to other levels, you'll want to get as many of them as possible.

The action here is instantly familiar to anyone who's played Smash TV or one of its derivatives. The level we played was circus themed, with strongmen lugging barbells around, clowns juggling bowling pins and throwing them at us, and the like. The basic machine gun deals a good amount of damage, being capable of mowing down enemies. In addition, we saw a Gatling gun, which obviously ups the rate of fire and adds a bit of spread to the bullets, and a rail gun, which did a lot of damage and went through enemies.

The game does attempt to add some tweaks to the formula, though. Instead of taking one hit before you die, you can take up to three direct shots here, which gives you the opportunity to regain some health by grabbing pickups. You can put shields on, as well. In addition, shooting some enemies will net you playing cards, which are added to a stockpile in the corner of the screen. When you've obtained five cards, your hand is given a monetary value based on its poker worthiness, with the value added directly to your score.

Cash Carnage Chaos is currently scheduled to be a launch-window downloadable title. The developers are hoping to have it ready on November 17, the actual launch day, but they're hesitant about confirming that at the moment. We'll have more coverage on the game as we learn more about it, so stay tuned to GameSpot. 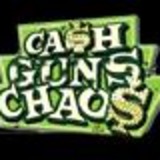