The goofy farm-themed shooter Shotgun Farmer has recently outsold Call of Duty, thanks to a low price and the social power of TikTok.

Have you ever wanted to use a stalk of corn to shoot kernels at your friends? If so, there's a new shooter that's right in your wheelhouse, and it's currently at the top of the Xbox One's digital charts. That game is Shotgun Farmers, and it sounds like a bizarre fever dream triggered by an autumnal trip to the pumpkin patch, complete with vegetable-themed weapons like the long-ranged Snigeragus and a literal pineapple grenade. Also, your missed shots grow more guns, which seems strangely appropriate.

A few factors have likely led to the surprise success of the game. For one, its asking price is only $10, which is much less than other paid shooters; for another, the farm-themed gunplay is friendly for all-ages; and finally, developer Megastorm Games has promoted the game heavily on social media under the name "QaziTV," particularly the platform TikTok. Many of its posts on the service have more than 1 million views.

QaziTV has uploaded videos to YouTube and TikTok that detail future plans for the game, including a Gun Game/Arms Race style mode called Crop Swap. Fans of farm-based puns and simple arena shooters may find a lot to like here. Shotgun Farmers was originally released on PC back in March 2019, and has just become available on Xbox One, making its sudden social media-fueled success similar to that of the hidden role game Among Us. That said, Shotgun Farmers' success on Xbox doesn't appear to have translated to massive sales on Steam as of yet, though its number of active players has increased in recent months. 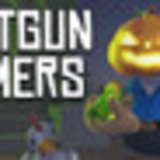