If you've ever wondered whether the Powerpuff Girls could take on Samurai Jack, then Papaya Studio's new brawler should have the answer. The Nintendo 3DS game squeezes 18 playable characters from more than 11 of the channel's famous shows onto a 3DS cartridge, including icons such as Ben 10 and Dexter. We got to play the game in the company of senior producer Richard Robledo recently, who was able to explain how the game should appease both single- and multiplayer fight fans.

Punch Time Explosion wears its Super Smash Bros. influences on its sleeve, and players of Nintendo's multiplayer beat-'em-up series will be right at home with the way the game plays. The aim is to attack your opponents until they're weakened enough to be smashed off the screen or, in certain scenarios, off the edge of the level. There are support characters that you can call in to help you in this aim, bringing the total cast up to over 50, as well as power-ups such as bombs and other weapons. Robledo is extremely proud of the game's multiplayer mode, which he feels technically outpaces the early 3DS competition. There'll be four-player local and online multiplayer, with the local option supporting download play from just one cartridge.

For those who have friends that aren't quite ready to make the upgrade to the 3DS yet, the game also has a story mode, with an original story that was produced in conjunction with Cartoon Network. The level we played was called the Marvellous Misadventures of Flapjack, the third level in the six- to seven-hour campaign. Unlike the multiplayer, the single-player adventure takes the form of a side-scrolling beat-'em-up. You can draw on the screen to perform explosive signature moves, while puzzles break up the action. One example is where we had to blow on the 3DS's microphone to raise a platform.

We had fun with both the single-player and the multiplayer variants of the game, the latter by connecting three consoles over wireless. Punch Time Explosion will be released in the 3DS's "launch window," with a May 2011 release pencilled in. Expect more on the game as we get it. 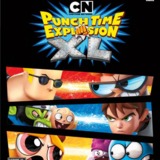