We take another spin at the wheel of this ultraviolent racing game.

Kayak Interactive and Synergenix have been hard at work tuning up their mobile port of Carmageddon in the months since the Electronic Entertainment Expo, and the effort shows. We last played the game on a Nokia N-Gage QD on the show floor, but our new preview build has been installed on an LG VX7000--a handset that you're far more likely to find in circulation. Although it appears that a few changes have been made to this version of the game to accommodate the limitations of the phone, it still gets high marks for playability and authenticity to the original PC game.

Fully 3D games that don't make use of V Cast's advanced capabilities are a very mixed bag, because it's much tougher to fit a decent graphics engine and textures into the memory footprints of more mainstream phones. Nevertheless, Carmageddon 3D looks really good on the LG VX7000--it's running in the mid-teens in frames per second pretty consistently, and it still has multiple camera angles to choose from during play. The game's textures are noticeably muddier, and the draw distance is shorter, but it's looking pretty good overall.

We've also had a chance to get a little more in-depth into the game's championship mode. There's a prodigious list of events to choose from, even at the beginning of the game. In addition to regular checkpoint races, you can participate in demolition derby events (either by yourself or teamed up with another car); "hold the flag" games, which are games of reverse tag; and crazy steeplechases where you try to pick up as many cones as possible. Plus, the game has some limited character-building elements to play with. For instance, you can build up prize money by completing events and then use the cash to buy a new vehicle--or upgrade your present deathmobile, if you prefer.

We also noticed that this version of the game features a multiplayer menu, where you can apparently join or host games. Unfortunately, neither of these options worked in our preview build. We're not sure how Kayak plans to implement this feature without using V Cast's enhanced bandwidth, but we can't wait to find out. Carmageddon 3D is nearly complete and should be appearing on US carriers in the near future. We'll bring you our full review of the game at that time. 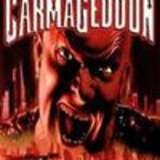