We spin some tiles with the upcoming Xbox Live Arcade strategy game, Carcassonne.

Carcassonne is an upcoming Xbox Live Arcade game based on the popular board game of the same name. It's a simple game in which players take turns placing tiles to connect roads and create cities. We recently spent some time playing the Xbox Live Arcade version of game and found it to be a fun, addictive mix of strategic planning and puzzle-solving.

The game is inspired by the real-world city of Carcassonne in the south of France. The city is located near important trade routes and was conquered several times as a strategic foothold during the Middle Ages. The city is well known for its huge, impressive walls and fortifications, which were built to repel would-be conquerors. It's these walls that provide the inspiration for the game.

Up to five players can play Carcassonne, each taking turns drawing and placing tiles or followers. The game begins with a single tile placed face up on the playing field. During each turn, you draw one tile at random and place it adjacent to another tile on the map. The tiles have roads, fields, or walls on them, and you can only place a tile next to an existing tile if all of the elements match up. A city is created when you connect wall pieces that enclose an entire area. The bigger the area your city covers, the more points you earn. You can also earn points by stringing together roads or by placing monasteries and completely surrounding them with other tiles.

However, you can only earn points if you place one of your followers on a specific section of a tile. You're given seven followers total, and you can place one per turn on the tile that you laid down during that turn. For example, if you lay down a tile with a section of road, you can place a follower on that road to claim it. Then once you build that road and connect it at the ends to intersections, monasteries, or cities, you'll earn points for each tile that road touches. If two or more players happen to have an equal number of followers on the same section, they each get points. Because you only get seven followers, you have to be careful about how many you put out there. When you complete a city, road, or monastery with one of your followers on it, you'll earn points, then that follower will go back into your stock and can be used again later.

The game ends when all 72 tiles are placed on the playing field. The average game takes less than 10 minutes, but of course, that time varies if you're playing against human opponents who like to take their time and consider each move carefully. In addition to the basic game, you can choose to play with The River expansion. The expansion plays the same, except the first several tiles played are connected to a river. Once the river is complete, the game continues as normal. The Carcassonne board game has several expansions in addition to The River, so it's a safe bet that additional downloadable content will be made available after the game is released.

You can play Carcassonne with up to four other players locally or on Xbox Live. There are player matches and ranked matches. You can set time limits on turns and adjust basic rules, such as whether or not to play with the expansion. In our experience, the gameplay is different if you have more players because whether you're playing with two or five players, there's never more than 72 tiles total. That means in a five-player game, you have fewer tiles to work with, so you have to adjust your strategy accordingly. In keeping with Xbox Live Arcade standards, Carcassonne supports voice chat and the Xbox Live Vision camera, so you can hear and see who you're playing against. There are 200 points worth of achievements to earn, and most of them seem rather easy. We earned five of the game's 12 achievements in the very first game we played. You simply have to do such things as build two adjacent monasteries, earn more than 150 points in a single-player game, build a road with more than five tiles, and so on.

Carcassonne has a pastoral look to it, with fields of golden grain. It also has simple 3D structures to represent buildings and roads on the game board. There is some nicely drawn character art, although you rarely get to see it. You can adjust the camera to several zoom levels and move it around the board with the right analog stick. Although you can't rotate your view, that doesn't seem to be a problem because we found the camera to be fairly accommodating.

At this point, it looks like Carcassonne will be a good fit for the Xbox Live Arcade service. With its simple but addictive gameplay and support for up to five players, it could offer a nice change of pace from more action-oriented competitive multiplayer games. We'll bring you a full review when the game is released next month. 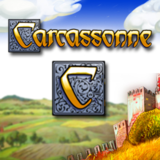