Capcom Fighting Evolution for the Xbox and Disney's Magical Quest 3 for the GBA now in stores.

Capcom Fighting Evolution punches its way onto the Xbox after being released last November for the PlayStation 2. The two-on-two 2D fighting game brings several of Capcom's popular pugilists together in the same game. Fan favorites from fighting franchises such as Street Fighter II, Darkstalkers, Red Earth, Street Fighter III, and Street Fighter Alpha all make appearances.

Unlike the PS2 version, Capcom Fighting Evolution on the Xbox supports online play over Xbox Live. For a deeper look into the game, check out GameSpot's hands-on with the Xbox version.

For gamers looking for something a little more lighthearted, Capcom offers Disney's Magical Quest 3 Starring Mickey and Donald for the GBA. The game features two playable characters, Mickey Mouse and Donald Duck, that are searching for Donald's missing nephews, Huey, Dewey, and Louie.

Disney's Magical Quest 3 also features cameos from other characters, such as Minnie, Daisy, and Pluto. Mickey and Donald will be able to use magical costumes to give them superpowers to defeat enemies and navigate levels. The game also features three minigames. 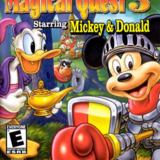