Today in Japan, Capcom started selling music from some of its games as downloadable tracks via Japan's iTunes Music Store. This marks the company's first entry into the music-download market--until now, Capcom fans could only buy its game music on CDs.

Capcom's initial iTunes offerings represent only a few franchises, but the company is prepared to expand the selection--and even to offer podcasts and video files. "We see iTunes as a music marketplace with a lot of potential and a direct connection to the market-leading iPod," said a spokesman. "Capcom has a wealth of game content, and we're eager to engage with this effective music distribution system."

Capcom plans to release additional titles every month, including some that aren't available on CD, and prerelease music tracks from upcoming games on iTunes. Podcasts and video file downloads are also in the works, but Capcom did not comment on timelines or specific content.

The music tracks on offer today come from two Capcom franchises: the courtroom series Phoenix Wright: Ace Attorney, and Full House Kiss--a series of romantic adventure games for the PS2 that have not been released in the US. As with the rest of iTunes' offerings, the tracks can be purchased separately for 150 yen ($1.27), or as an album for 900 to 2,400 yen ($7.65 to $20.40), depending on the selection. 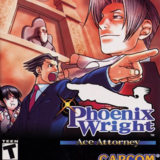