Capcom puts the final nail in the coffin of its 3D fighting game.

Though initial reports suggested that it had been canceled a while back, Capcom has announced on its Web site that the development of Capcom Fighting All Stars has been terminated. No specific reason for the cancellation was given in the statement. Capcom Fighting All Stars was a 3D fighting game scheduled for release in arcades this winter, but the game's release schedule became tentative after its public display at the AM Show last September. 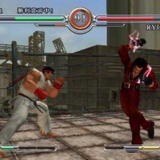