Kinji Fukasaku, the director of Battle Royale, takes the helm of Capcom and Sunsoft's joint project.

1 Comments
Capcom and Sunsoft have announced in a private unveiling that they will release Clock Tower 3 for the Sony PlayStation 2. The series was originally one of Human's flagship titles. However, the third installment will be developed jointly by Capcom, Flagship, and Sunsoft. Kinji Fukasaku, director of Takeshi Kitano's latest motion picture Battle Royale, will be the director of the project. No release date has been announced at this time. 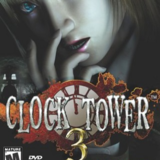