Sensible Software's strategic shooter to be remade for the handheld console; no word whether Jools and Jops are set for another tour of duty...

Back in the '90s, Sensible Software made a big impact on the gaming market with a handful of very popular games. Recently, some of these titles have made a comeback, such as Sensible Soccer, which was updated and released a couple of months ago. Now, another classic game from the Sensible stable is being reprised for the PlayStation Portable--the darkly comic wartime shooter Cannon Fodder.

The original game was played from a top-down view and tasked players with using small squads of soldiers, one at a time, to progress through maps, eliminating any opposition they found. A version of the game was also released for mobile phones late last year. The new PSP version, being developed by Codemasters, will update the graphics, but the core gameplay will remain the same.

The game is set for a Q2 2007 release and will include four-player wireless deathmatch modes as well as the traditional single-player campaign. However, there's no indication yet as to whether or not the characters from the original game, all based on Sensible Software employees (and headed up by Jools and Jops), will make a return. 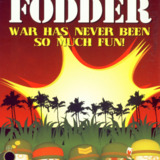