EA announces that the first expansion pack for Command & Conquer: Generals is currently in development at its LA studio.

"The generals challenge mode adds an exciting new dimension to the RTS play experience," said Mark Skaggs, executive producer, EALA. "Players will have a host of new units to play with and new strategies to learn as they battle against the top generals in the world."

In the generals challenge mode, players will get to battle against nine distinctive armies, and, after defeating the AI generals, they'll have the option to select the conquered armies for online play. Other new features in Zero Hour will include new units and three new single-player campaigns consisting of no less than 15 new missions. New units revealed in today's press release include a US Specter gunship and GLA combat motorcycles, while new single-player mission objectives will include destroying a US fleet in the Mediterranean, rooting out a splinter cell in Cairo, infiltrating a US intelligence building, and sending in special-ops forces to capture weapons of mass destruction.

The original Command & Conquer: Generals will be required to play Zero Hour when it's released later this year. We'll bring you more information on the expansion pack as soon as it becomes available. 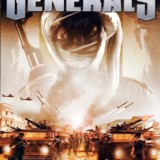