What is dead may live again.

Rising Thunder was a big deal in the fighting game community when it was announced way back in 2015. It was in development at Radiant Entertainment, a studio led by fighting game legend Seth Killian and EVO Tournament co-founders Tom and Tony Cannon. After Radiant was bought by Riot Games in 2016, however, work on Rising Thunder shut down--but now, it looks like the game will live again.

Fans of the game have attempted to keep it playable since its cancellation, and today, Radiant revealed that it's taken notice of the efforts. In response, it announced that it'll release a final build of Rising Thunder for free on PC. It's called Rising Thunder: Community Edition, and it's meant to give the community something to both play and improve upon. It's essentially the same game as the final build released to the public in 2016, albeit with some important additions.

First, the studio has added offline, local multiplayer support. It'll only support keyboard vs. controller play at first, although Radiant says that "it should be straightforward to hack in 1p controller support through external scripting."

In addition, Radiant is releasing an open-source server along with its source code so that you can actually play Rising Thunder online once again. The developer gives the caveat that it is a rudimentary server; however, by giving the source code to the community, Radiant is allowing fans to improve and modify it over time.

This is a free release and the studio promises that it'll always be free. In addition, Radiant reiterated that it's working on something new. We still have no idea what this new game is--but Radiant says we'll hear about it "when the time is right." 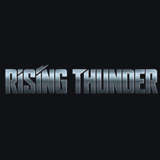