We've had a chance to play Knockout Kings for the Nintendo GameCube, which was shown in playable form for the first time at Electronic Arts' Camp EA press event today.

Knockout Kings for the GameCube isn't a true sequel to Knockout Kings 2002, which appeared only on the Xbox and the PlayStation 2--it is probably best described as a new and slightly improved version of that offering. When completed, the GameCube version will contain most if not all of the same features, fighters, and gameplay as its KO Kings 2002 counterparts. There are, however, three major additions that will be featured in KO Kings 2003. The biggest is the addition of a new mode called slugfest, which is an endurance mode of sorts that eliminates rounds and forces you to face one opponent right after the next.

This new mode is especially well suited for two players, since it's extremely fast-paced and solely focused on the action. This mode also features a new meter that allows you to earn special punches, in-game rewards, and power-ups. Since this mode allows you to earn points based on your performance, you can set matches so they end when one of the fighters reaches 20,000 points, gets three knockdowns, or hits any number of other milestones. The second addition to the game is more of an improvement to the game's career mode, which now takes your fighter's age into account. You build your fighter's abilities up throughout his career, but eventually, you will start to notice that his skills diminish as he gets older. You'll have to decide whether to retire him or just keep climbing back into the ring for a payday. The final addition to the game is actually that of two new fighters, Rocky Marciano and Sonny Liston.

While we were impressed by the early version of Knockout Kings for the GameCube, we'll have to wait and see what the final version of the game is like when it ships this October. Be sure to keep checking the site for more details on the game, as we're sure to see more of it before its release. 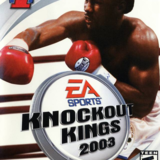