We monkey around with some of Buzz! Junior: Jungle Party's minigames using the game's unique controller.

Buzz! Mega Quiz is a trivia game with a unique controller that's geared toward adults, but that controller is so cool that you just know kids want to get their hands on it. And that's where Buzz! Junior: Jungle Party comes in. It uses the same controller as Buzz! Mega Quiz, but instead of testing their trivia knowledge, kids (and adults for that matter) will be able to test their reflexes in a series of minigames. The game's already testing the skills of Europeans and will be doing the same in the US come October.

The game will ship with a set of four unique controllers that all connect to a hub, which in turn connects to the PlayStation 2 via a USB cable. The controller is held in one hand, and you use your thumbs to hit the buttons. Some games require only a well-timed press of the red "buzzer" button, while other games will have you frantically pressing the button on the controller that matches the color of what's happening onscreen. There are 25 multiplayer games and 10 single-player games.

There are three difficulty settings, and you can choose to play a short, normal, long, or custom game, depending on how much time you have. When you start a game, you'll get to customize your character, which just so happens to be a monkey. You can change your character's shirts and shoes and even give your character different types of sunglasses. Once you've got your monkey customized the way you like, it's off to the minigames.

If you've played any other party game, you've already got a good idea of how Jungle Party plays. The games are simple and easy to learn, but the action is fast and intense. The first game we played was called "lion tamers," and the objective of the game was to stick our monkey's head into a lion's mouth for as long as possible without getting bitten. To stick your head in you press the buzzer, and when you think the lion is going to close its mouth, you hit the buzzer again to pull your noggin out of harm's way. This sounds easy, but it's surprisingly tough. Every time you pull your head out you get to keep the points you've accumulated, but you've got to be daring to earn the really big points. Sometimes the lion will act like he's closing his mouth, and other times he won't open it very wide, thereby lessening the amount of time you have to react.

Another fun game was "whackers revenge," a game similar to whack-a-mole, where you have to quickly locate your monkey, figure out the color of the area of the log he's in, and quickly press the corresponding button on the controller before getting whacked on the head. "Keep it up" was a simple game that involved juggling a soccer ball via well-timed presses of the buzzer, but like so many of the games, it was more challenging than it looked. Other games saw us climbing up ropes and avoiding falling fruit as we climbed, jumping fallen trees in an obstacle course, noting the color of hippopotamus' bathing suits as they jumped into the water, testing our banana-shooting reflexes in "quick draw," and covering a spinning gorilla in paint.

Jungle Party uses a colorful visual style to appeal to its younger audience. The monkeys are cute and have a bunch of funny animations for when they win or lose. The other animals in the game are just as entertaining--even when they're keeping you from winning. Color-blind gamers may have a hard time with some of the games that require color recognition, but there are plenty of games where color doesn't play a key role. Even though Jungle Party shares the "Buzz!" moniker of Mega Quiz as well as the controller, the two are entirely different games. This collection of minigames is definitely geared toward the younger set, but there's enough challenge here that adults should be able to have some fun playing along. 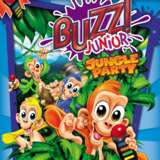