As part of the run-up to the 3DS's launch in Japan next month, Nintendo rattled off a list of games that will be released alongside the system, one of which was Square Enix's Puzzle Bubble Universe. Today, Square Enix confirmed that Puzzle Bobble 3D will also arrive in North America, under the name Bust-A-Move Universe. The publisher did not say whether the title will join the 3DS's North American launch on March 27, saying only that the game will be available this spring.

Bust-A-Move Universe won't deviate far from the match-three tradition that Taito established in the franchise's arcade original in 1994. However, Bub and Bob's latest outing will see a handful of enhancements over previous iterations, including all-new 3D graphics tailored to Nintendo's new handheld.

While Square Enix did not delve into these new features, the publisher did mention a handful of modes. These include the traditional Puzzle mode, where the game's iconic lizards launch a variety of colored balls into a playfield in an effort to match and clear other balls. There are also 100-second, 300-second, and Nonstop Bubbles modes.

Bust-A-Move Universe will be priced on the low end of 3DS wares, coming in at $30. 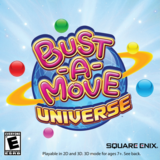