Bungie is beginning again. After spending years making sequels and extensions to the Halo franchise, the studio is crafting an all-new universe--Destiny--with Call of Duty publisher Activision.

The developer recently held an hour-long discussion about its worldbuilding techniques at the Game Developers Conference, where writer and design director Joe Staten and art director Christopher Barrett spoke about the creation of Destiny from concept to production.

GameSpot met with Staten and Barrett shortly after their talk to go deeper into the concepts and ideas brought to light during the discussion. Below are highlights from our time with the Bungie developers.

On inspirations for Destiny

Barrett: Some of the things that I like, or our team really liked, from that kind of mixture of genres--you could go anywhere from Thundarr the Barbarian; that was something I loved as a kid and actually has some of those similar elements. Obviously the big ones like Star Wars or Dune or any of those things that we liked as kids. As far as the art, the art style definitely looked towards painters and images that had those big ideas in them…sort of timeless. Like I said in the talk, John Harris had that kind of feel. Seventies sci-fi art had this big world-building kind of feel and idea; stuff that would span galaxies and solar systems. And all that stuff really was inspiration for me, for sure.

Staten: So in terms of other inspirations, I would just pile on there certainly we read a ton of genre fiction. Absolutely sci-fi and fantasy. We eat it up. But the thing we really looked at…I think typically, for the Halo games, we looked at movies. But really for this game, we looked at serial television; great dramas like Lost or The Wire; Battlestar Galactica. When you're building a world and you want to evolve it over time, it really helps to have an understanding of how you build this longer-form narrative. So for us, that was a really interesting new thing we did. I think we probably spent more time watching television these days than we do movies and that's definitely influenced the way we think about building our story.

On the difficulties of creative collaboration with a 400-person team

Staten: For me, I think [Lord of the Rings author J.R.R. Tolkien], having just read through the books with my ten-year-old son, is an incredible talent. I think [Lord of the Rings] is this creation of a single person, though, and we're in a totally different world. We're creating a game that's the creation of 400 people. And you have to be really careful in that world not to get too precious; to go too deep down your own rabbit hole. And then come out with a whole bunch of rules and strictures; 'this is possible in our world,' 'this is totally off-limits.' It's not good collaboration. And ultimately, I don't think results in creative ideas.

On whether or not Destiny needs consistency

Staten: We absolutely do. And we have pages of words that define things in great detail. But there's nothing worse than having words that go stale. Writing reams and reams of words and then nobody ever reads them or nobody updates them and they go out of date. So this has been really, really hard; we don't do it perfectly. But we spend a lot of time just trying to boil down things to a simple sentence like 'This is what this place is all about' and 'If you remember nothing else, remember these simple words.' And that's been hugely effective. And so we try really, really hard not to create a story bible; we'll create a style guide to talk to people about art, but we're trying really, really hard not to build a bible.

Barrett: The other thing is, when we started talking about what this world could be, we always said to ourselves we want to make some place where almost anything is possible, so even now, as we're building the world, we have those defined, but we're always evolving. Over the next ten years we're going to be making up new stuff to put in there and we want to build as big a net as possible so those crazy ideas can fit.

Staten: I think if you want to tell a credible story, yes, absolutely. In terms of the player choice, which is what we were talking about, we want players to be a hero. And if you're a hero, then that means you're largely on the side of good. And you might make a racial choice to be an Exo, which is artistically and thematically a little more sinister and dark. You might choose to be a Hunter class, who is just a little bit more in the bounty hunter, roguish vein. But at the end of the day, when you're a player in this world, you're a guardian of the last safe city on Earth. And it's really important that you are this heroic, hopeful figure in the world. That said, you're absolutely going to run into other humans and other Exos and other Awoken who, some are, bad people. They have bad plans. There aren't all good people in the world that you run into. So you will see that breadth across all the characters in our game, but if you're the player, you're the hero.

On how the idea of hope factors into Destiny

Staten: The kinds of experiences that I want to play, and that we as a studio I think want to put into the world--I think about my own kids or people who are going to play this game. How do we want them to interact with this world? What experience do I want them to have? Post-apocalyptic worlds are fun. Worlds with skulls and blood and hellfire are awesome, but if I want to spend time in a world, if I want to be an agent of change, I want to be an agent of good. I want it to be a hopeful outcome. We go back and forth about the name Destiny and we joked about it for a while about whether it was the right name, but I think we think about Destiny and what kind of Destiny do you want to have? Do you want to have one that ends in annihilation and reprehensible things? Or do you want to end in a hopeful, heroic place? For us, that's really important. That legacy that we want to build is a hopeful one.

Barrett: And from the art side, there's a lot of games that intentionally are making it a really grim or dire world and we think that we, intentionally, wanted to make a place--if we're expecting players to come back here every day over and over we wanted to build a world that's accessible to everyone and hopeful and fun to visit. And sure, you can have evil spaceships and zombies and stuff like that, but those are the things that give flavor, but at the core, we want to make a beautiful, hopeful place that's inspiring to people.

On the mystery of Destiny's world

Staten: One of the choices we made early on, like [Barrett] said, was where to set this game. And when. Do we want it to be a galaxy far, far away? Do we want it to be a planet-of-the-week like Star Trek? What really clicked in my mind when we started mixing sci-fi and fantasy is with fantasy you get this strong sense of history; you get myths and legends and ancient gods; different dream realms and stuff that's steeped in time and legend. And we wanted to create that same feeling in this mythic sci-fi world. 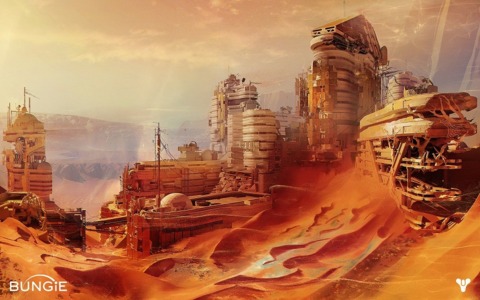 Bungie hopes players will want to explore the red dunes of Mars.

So one of the things we did early on was decide we wanted to center it on Earth, but we want to build a history. We want to build a block of time that occupies from the here to the now to the distant future. But we want players to go back and explore this lost human history. And so for us, that was the source of a lot of the mystery in our world was this [period] of time where something happened, but you don't know what. And we're hundreds of years in the future now exploring back through these ruins of human civilization.

Barrett: We talked about a lot in our concept art; if you look at a painting and you don't want to know more, if there isn't a mystery there, you're going to get bored looking at it. So every shot we try to create, especially the key images, we want somebody to ask a question about it. 'Why is that there?' 'What's behind that little door off in the distance?' or 'What's that character doing in the distance?' That's absolutely a key part of making evocative concept art.

Staten: You show up on Mars, now in the game we're playing, and you see this city buried in sand and it's a mystery that draws you deeper; it's not one that's repellent or dark and grim. It's a beautiful place that is steeped in mystery and wonder so that's really what we want the world to do; just keep dragging you deeper and deeper and deeper.

On whether or not science-fiction can avoid thematic repetition

Staten: I hadn't really thought about it in that way, but I think it's the big reason why we wanted to inject fantasy into this world. With the world of mythic science fiction, anything is possible. And when you round a corner and see up high a combatant; for example something that looks much more like a wizard-space-zombie. That's not an experience you get when you're playing most straight-up action-shooters or sci-fi shooters. That was really a critical part to making that experience unique and fresh--was injecting these more fantastical and exotic elements.

Barrett: I think it's always something you think about is creating this completely new idea that no one has ever seen before. And we definitely have some of those in the game, but also we do that like…players aren't bringing anything to it; it's not familiar; in some way, you want them to see things that they recognize in some way so they feel emotional when they see it again. So we try to strike that nice balance between those two elements.

Destiny is currently in development for Xbox 360, PlayStation 3, and PlayStation 4. The game is described as the very first "shared-world shooter." It is an online-focused title, though it is not a massively multiplayer online game and will not carry a subscription fee. Activision is not planning to ship Destiny until 2014.