The previously Switch-exclusive Bubble Bobble game is coming to Sony's console before the end of the year, and it'll have new content that will also come to Switch.

Bubble Bobble 4 Friends is expanding beyond the Switch, with a PlayStation 4 release planned. The game's PS4 release was announced on the game's website, which promises that the game will arrive "at the end of 2020". The game will receive a physical and digital release in America, Europe, and Australia.

The game is the Bubble Bobble fans know and love, but reimagined for 4-player gameplay.

The site also promises that the game will be "expanded greatly" on PS4, adding new modes and stages for more multiplayer fun. Switch owners will not miss out, as this content will also make its way to the version available on Nintendo's console--although it's unclear whether it will be free or not. The original game featured 100 stages.

There's a fan art contest currently running as well, and the ten winners will have their art featured in the game's credits and receive a PS4 code when available. You can enter now.

GameSpot did not review Bubble Bobble 4 Friends, but it currently holds a Metacritic score of 68 on Switch. 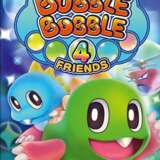