Bubble Bobble Double Shot announced for DS by Rising Star Games; platformer plays on both screens, will be out in early 2007.

Taito's bubble-blowing dinosaurs, Bub and Bob, have spent much of their recent gaming years as characters in the popular Bust-A-Move puzzle series. However, Rising Star Games is bringing them back to their roots--as the main characters in a new Bubble Bobble platformer.

The European game publisher, a subsidiary of Japan's Marvelous Interactive, has announced that it will release Bubble Bobble Double Shot for the Nintendo DS in early 2007. A North American release date has yet to be confirmed.

The new game will feature a third character, Babu, and players will need to switch between the three cuter-than-thou reptiles to defeat enemies. The single-player campaign will feature more than 100 levels and cooperative multiplayer modes supporting up to three participants.

Bub and Bob have platformed on the DS before. Taito's Bubble Bobble Revolution was released in October but was met with abysmal reviews.

No price or rating has been announced for the game. 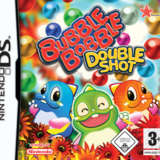