Brothers in Arms: Furious 4 delayed out of 2012

Gearbox Software's new World War II shooter Brothers in Arms: Furious 4 won't be released until at least 2013. Speaking to CVG, studio CEO Randy Pitchford confirmed the shooter will not make it out this year, as was originally planned. "I can't really talk about Furious 4 right now," he said.

Brothers in Arms: Furious 4 was announced during Ubisoft's 2011 Electronic Entertainment Expo media briefing and was expected to arrive by the end of last month. In May, rumor had it the game had been abandoned, based on trademark issues, but this later proved to not be the case.

Elsewhere in the interview, Pitchford explained that Brothers in Arms: Furious 4 has "evolved." He said gamers will be "surprised by what they see, and it's still evolving." He said one of the reasons Gearbox is keeping quiet on the project right now is because "further changes" need to be made as a result of the project's evolution.

Regarding when Pitchford and Gearbox plan to open up about Brothers in Arms: Furious 4, Pitchford explained that he "might come around" to talk about the game between the release of Borderlands 2 (September) and Aliens: Colonial Marines (February).

The first new installment in the Brothers in Arms franchise since 2008's well-received Brothers in Arms: Hell's Highway, Furious 4--as of June 2011--takes place during World War II and follows a band of four soldiers chasing Hitler. 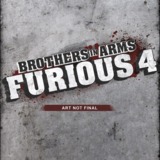