Brian Lara's back at the crease

The only cricket game to ever reach number one in the Chart Track All Formats UK game chart was Brian Lara International Cricket 2005. Since then, cricket's profile in the UK has skyrocketed, most notably after the England team reclaimed the Ashes last summer. Although performances since then have been variable to say the least, anticipation is building for the Cricket World Cup next year. To capitalise on that, Codemasters has announced the release of Brian Lara International Cricket 2007 in March 2007.

The game will ship with several play modes, including an ICC Champions Trophy competition and one-off Tests or One-Day matches. Most notably, however, the game will include official ICC Cricket World Cup content, meaning that hundreds of the world's top cricketers will be fully licensed.

Several aspects of the game have been improved, including batting, bowling, and fielding. Player likenesses will now be photo-realistic, and all official World Cup stadia in the West Indies will be re-created for the game. Brian Lara International Cricket will be available for the Xbox 360, PC, and PlayStation 2 and will be playable online and across Xbox Live. 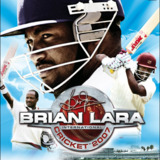