Boxing Fever announced for the GBA

Majesco has announced a new sports game, titled Boxing Fever, for the Nintendo Game Boy Advance. In terms of its visuals, the game takes a decidedly cartoon-style approach to the sport. Players can choose to control one of eight colorful characters and two other hidden bosses as they hit the gym, train, and eventually take part in five different boxing championships. Aside from the single-player career mode, the game also features a multiplayer mode. Here, two players can compete against each other through five difficulty levels. Other features include an extensive soundtrack and a rather involved narrative.

Digital Fiction, which previously worked on Palm handheld games, is developing Boxing Fever. The game will be released this October for the Game Boy Advance. 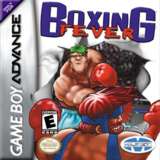