Borderlands Dev Reveals A New Shooter With A Twist

Having successfully mixed shooters with RPGs, Gearbox will now try to blend shooters and card games.

Gearbox, which is best known as the developer of the Borderlands series, has quietly revealed its next project. Like Borderlands, Project 1v1 is a first-person shooter, but it offers a twist.

Project 1v1 is described as a "competitive first-person shooter that combines the action of fast-paced 1v1 first-person combat with the metagame strategy of a collectible card game." Unfortunately, that's virtually everything we know; the email Gearbox sent out to some fans and the game's new website both contain little more info than that. You can check out some artwork from the site below.

Despite a general lack of details, some people will have the chance to try the game out quite soon. A "short" closed technical test is scheduled for this summer, and Gearbox has opened sign-ups for the beta on its website. This will include only a "limited number of players" and is meant to "test the online infrastructure and learn what players like you think about the game in order to inform and influence future development." While international players can sign up, servers will be hosted in North America, so the game may not run ideally for those elsewhere in the world.

This test will consist of three game modes: Challenge lets you take on a friend; Arena lets you take on the "current Arena champion," with a win elevating you to their position; and Ranked, where you play against an opponent of similar skill. Wins in Ranked mode net you experience and crates that provide you with more cards.

Platforms are not explicitly laid out on the website. However, the beta sign-up process mentions the need for a Steam account, which suggests it will be PC-only, at least for now. Additionally, Project 1v1 is only a code name; the final version will be called something else.

This news may come as a disappointment to those hoping to hear about Borderlands 3, but we do know that Gearbox is at work on a new game in the series. Earlier this year, it showed off some new technology that may be used to power a future Borderlands game. And just recently, Take-Two reiterated that a new game from one of 2K's "biggest franchises" will launch by early 2019--a game that might very well turn out to be Borderlands 3. 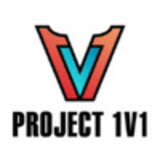