Boomerang X Makes You Feel Like You're The Boomerang, And It's Awesome

First-person arena shooter Boomerang X sends you flying through the air to take down baddies with a deadly magic throwing star. 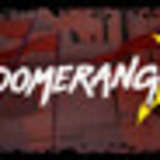 Only a few steps inland from the beach where your ship is wrecked at the start of Boomerang X, you realize some great calamity has befallen this strange place. As you make your way into the interior of the island, you find a ravaged village and the bodies of the giant mantis people who once lived there. Whatever happened here, they tried to fight it. They failed.

But then you find one of their artifacts: a strange boomerang, which looks more like a throwing star made out of bone (or more specifically, the Glaive throwing blade thing from the movie Krull). The mantis people, the Yoran, weren't able to use this boomerang to save themselves, but you sure can. Just seconds after finding it, you'll whip the blade through strange monster creatures made of goo as easily as if you had invented the weapon.

Things move fast in Boomerang X, as we discovered with a hands-on preview of the game that lasted about an hour. The game is actually a series of wave-based arena fights where several brands of these goo creatures appear, and you need to cut them down to size with the boomerang. You play Boomerang X from a first-person perspective, so these fights have a platforming and shooter feel, with the caveat that you only have this one weapon to defend yourself with. The handy thing about your boomerang is that it always returns to your hand (as you'd expect), but that delay in shots means that every throw is a tactical decision.

The arenas are quickly filled with different brands of monsters, like bugs that crawl on the ground and flies that buzz in the air. Some of them are marked with a yellow icon, and you know ahead of time that you need to kill a certain number of these marked enemies to complete the wave. There are always more monsters than the ones that you must kill, so if you're strategic, you can just drop the important baddies--the rest vanish as the next wave starts.

The thing is, these fights quickly become overwhelming, and you learn very quickly that mastery of the boomerang goes hand-in-hand with mastery of movement. You can throw the boomerang through enemies at close range or hold the throw button for a second to get much more distance, and if the blade takes too long to bounce back to you, there's a second button dedicated to recalling it. You can also bound through the air at huge distances. You don't necessarily get much height, but you do get a ton of distance, so in the first few fights of Boomerang X, you're constantly repositioning to avoid monsters streaming toward you in order to get better angles and slice down the creatures that need destroying.

Your need to stay mobile and keep slicing only gets more intense as you advance through Boomerang X's arenas, but you quickly learn that the Yoran civilization had more going on than its destroyed huts and spear-filled armories let on. Soon, you start to add new properties to the boomerang--the coolest being the ability to return yourself to the boomerang, rather than the boomerang to you. That effectively means you can huck the boomerang into the air and then zap yourself to its location, sending you flying and giving you aerial combat capabilities.

After that, Boomerang X becomes a fast-paced, ludicrously vertical experience, where you're just whipping around arenas, taking down enemy after enemy with precision glaive throws. Right after getting the ability to use your boomerang to rocket through the air, you also gain the ability to focus and slow down time for short bursts while you're charging the boomerang's longer throw. With that, never touching the ground becomes an incredibly viable strategy because you can zero in exactly where you want to go or carefully target the tougher enemies' red ruby-like weak points.

And the enemies do get quite a bit tougher and more unpredictable. While your first few batches of creatures are usually just slow-moving missiles who charge straight at you and die pretty simply, later creatures are less simple to take down. When you hit the arena called the Poisonous Well, after traveling through the Yoran's statue-filled gardens and giant colosseum, you encounter what feels like the game's first boss--a huge, poison-spewing frog that leaps into the air and comes down in an attempt to crush you. The frog monster has its weak points on both its back and belly, so you not only need to shoot up over it to hit your mark, but you also have to brave getting beneath its deadly attack.

Boomerang X does a great job of escalating the situation, though, because the frog is just the first wave. More and more enemies are added to the mix, requiring you to keep your head on a swivel as you try to deal with threats. Every fight in Boomerang X is about positioning and target prioritization. You need to pick the places you want to fly to with your boomerang to get yourself away from things like flying squids and poisonous frog puke, and you need to take out the toughest enemies fast before they overwhelm you. But while it's a challenging prospect to constantly assess and reassess the battlefield while also flying through the air, Boomerang X makes it pretty intuitive; the time-slowing ability gives you just enough of an edge to let you carefully pick your next spot or make an important throw.

As you move on, you gain additional abilities that are dependent on your boomeranging skills. The Scattershot fires a short-range blast in the area in front of you, allowing you to take out lots of targets at once, but only if you manage to kill two enemies with a single boomerang throw first. The Needle fires off a sniper-like bolt in a straight line, but to access it, you need to drop three enemies at once with one of your special attacks like Scattershot. Both tools keep adding to the things that you need to keep in mind in Boomerang X--every move has to be deliberate if you want to stay alive, and even accessing your tools requires doing the math about what to kill, what to avoid, and where to reposition.

The inventiveness of the enemies helps keep you on your toes and makes those decisions a little easier, though. While at first, it can feel like Boomerang X expects you to think about too much stuff all at once, between enemy locations, your abilities, and your own position on the battlefield, a rhythm develops pretty quickly. And that's where Boomerang X really gets into the flow and becomes fun and intense.

One early arena, the forest-like Yoranwood, brings in a huge giraffe-like enemy that dominates the battlefield by creating a huge lightning storm around its head. This creature is like 50 feet tall, a giant that just strays around, making huge swathes of the arena extremely dangerous to occupy--if you're beneath the storm cloud, you're vulnerable to lightning strikes provided you aren't moving quickly enough, and passing through it will also damage you. To get all the creature's weak points, you need to hit its legs beneath the cloud, then travel up and hit the top of its head above it. So most of the fight becomes about staying high over the storm and taking out priority targets, like the demon-like monsters that can generate endless hordes of squids that target you like heat-seeking missiles. Developer DANG! does a great job of marrying your tools with the demands of the battlefield in a way that makes keeping enemy abilities and your own in mind feel natural--reacting to dangers, taking down threats, and traveling around the battlefield gives you lots of opportunities to smartly use everything at your disposal until it quickly becomes second nature.

That fast-paced but brainy take on combat and movement is what makes Boomerang X exciting in fight after fight, while its fascinating level design leaves you with clues about the strange and fascinating world you're exploring. It seems like an easy game to get lost in, both as you're uncovering the secrets of the Yoran, and as you enter a flow state of perfectly boomeranging through enemies and around arenas.

Boomerang X is slated to release this spring for PC and Nintendo Switch.