We spend some quality time with a near-finished US version of Bomberman's first Wii adventure.

Currently scheduled for release early in 2008, Bomberman Land for the Wii promises two distinct gameplay experiences. The first is a battle mode that faithfully re-creates the multiplayer Bomberman games of old while adding a number of new optional features. The second claims to be a story mode but actually amounts to little more than yet another Wii minigame collection--distinguishing itself only in the way that it forces you to unlock the games before you can play them. We recently spent several hours doing just that with a near-finished version of Bomberman Land. While we're not nearly as excited for the story mode as we are for the old-school battles, we did manage to have some fun along the way.

Before we get into the story mode details, let's talk about Bomberman Land's battle mode. Unfortunately, there's no online functionality, but up to four players are supported. There are also plenty of gameplay options that should appeal to newcomers and veterans alike. In addition to the classic Bomberman rule set--which can be played on no fewer than 23 different types of stage--there are modes in which your objectives are somewhat more imaginative than simply killing everyone else and being the last bomber standing. For example, crown mode tasks you with being the first bomber to reach a crown located at the far end of the level by any means necessary. Stars mode, on the other hand, challenges you to collect as many stars from destroyed bricks as possible. Bombers who get too close to explosions aren't eliminated from the game but drop their stars all over the map for other players to collect. With the exception of a bizarre "Wii mode" in which you simply fire bombs at a level filled with enemies by pointing the Wii Remote and pressing the A button, all of the battle mode games employ conventional D pad controls.

You'll be afforded no such familiarity in Bomberman Land's story mode because even walking around to get from minigame to minigame requires you to point at the screen and push a button to have your character follow your cursor. The story revolves around an unruly Bomberman Land champion whose wardrobe is only slightly less offensive than his attitude toward everyone he deems beneath him, which is everyone. The only way to unseat Champion (that's his name, apparently) is to compete in a lengthy league-based tournament that comprises about 50 different minigames. Very few of the minigames are bomb-related in any way and, predictably, the quality of the games on offer looks to be every bit as varied as their content.

Some of the minigames, such as Laser Ball (loosely based on the Pang games of old), are so much fun that we found ourselves wishing that we could play them longer. Others, though, simply tasked us with performing the same actions with the Wii Remote (mash this button, move the remote up or down, now swing it like a sword, point and shoot...you get the idea) as we've done in other minigame collections in the past, albeit accompanied by Bomberman-style visuals rather than those of games that star Wario, Raving Rabbids, Tamagotchis, or Miis. The majority of Bomberman Land's minigames are designed for solo play, but a handful of them can be enjoyed by either two or four players once they're unlocked.

To progress in Bomberman Land, you'll need to play at least some of the minigames over and over again because doing so is the only way to earn training points (TP), which are one of the game's two currencies. TPs are used to purchase licenses necessary to travel to other zones, as well as various items of clothing that have the potential to endear you to the staff at Bomberman Land. If they're impressed with your fashion sense, said employees will give you extra tokens (the other currency) at the beginning of each tournament round, essentially giving you more chances to get high scores because each game costs at least one token to play. Playing dress-up with Bomberman is more fun than you might expect largely because there are so many amusing items to choose from--at least after you've been playing for a while to unlock them. Ninja boots, teddy bear ears, a horse's head, a cowboy outfit, and 3D glasses are just a handful of the more memorable items that we've tried on thus far, though on occasion we've ended up opting for less appealing items simply because they're more highly rated on the game's fashion scale.

We look forward to bringing you more information on Bomberman Land as soon as it becomes available. 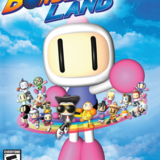