Source: A press release on entertainment site Skewed &amp; Reviewed attributed to Boll. The official story: See below. What we heard: Ever since House of the Dead hit theaters in 2003, Uwe Boll has become one of gamers' favorite whipping boys. Besides the aforementioned adaptation, the director... 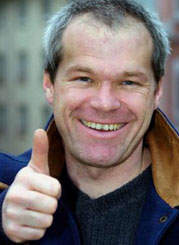 What we heard: Ever since House of the Dead hit theaters in 2003, Uwe Boll has become one of gamers' favorite whipping boys. Besides the aforementioned adaptation, the director has turned two other high-profile games-- Alone in the Dark and BloodRayne--into critically eviscerated would-be blockbusters.

Although he hasn't received many box-office dollars for his efforts, Boll has been the subject of the slings and arrows of countless snide forum posts and deprecating articles. So, today, when Skewed & Reviewed first posted a press release announcing that Boll wanted to take on his detractors in the boxing ring, many took it to be the latest in a series of running jokes about the Schweinfurt, Germany-based filmmaker.

Guess what? It isn't.

Today, GameSpot contacted Boll's recently-hired-but-already-weary-sounding publicist to inquire if the release on Skewed & Reviewed was indeed the real thing. "Here is the press release that you requested," was the sum of the terse e-mail response, which came with a complete version of the release attached.

"Uwe Boll Challenges His Critics 'To Put Up Or Shut Up!'" was the headline of the bellicose statement. It went on to throw down the gauntlet to Boll's online detractors, much like the titular characters did in Jay and Silent Bob Strike Back.

"I am fed up," said Boll. "I'm fed up with people slamming my films on the Internet without see[ing] them. Many journalists make value judgments on my films based on the opinions of one or two thousand Internet voices. Half of those opinions come from people who've never watched my films."

To answer his critics, Boll is orchestrating what might be considered one of the more bizarre sweepstakes in memory. After he finishes the ongoing shoot of In the Name of the King: A Dungeon Siege Tale, and the subsequent project, Seed, starring the TV incarnation of Conan the Barbarian, bodybuilder Ralf Moeller (Gladiator), Boll will move onto the big-screen version of studio Running With Scissors' controversial Postal series. During that shoot, Boll will personally take on his biggest detractors in boxing matches to be used in the film.

"Towards the end of the filming of Postal the five most outspoken critics will be flown into Vancouver and supplied with hotel rooms," read Boll's press release. "As a guest of Uwe Boll they will be given the chance to be an extra/stand-in in Postal and have the opportunity to put on boxing gloves and enter a BOXING RING [emphasis in the original] to fight Uwe Boll. Each critic will have the opportunity to bring down Uwe in a 10-bout match. There will be five matches planned over the last two days of the movie. Certain scenes from these boxing matches will become part of the Postal movie. All five fights will be televised on the Internet and will be covered by international press."

However, not just anyone who is so inclined will have the chance to put the smackdown on Boll. "To be eligible you must be a critic who has posted on the Internet or have written in magazines/newspapers at least two extremely negative articles in the year 2005. Critics of 2006 will not be considered," said Boll's statement, meaning that said disparaging reviews must predate the theatrical release of BloodRayne.

Boll also called out two of his fellow filmmakers by name to take him on in the ring. "Roger Avary and Quentin Tarantino are among the most eligible candidates," read the statement, referring to the writer and writer/director of Pulp Fiction. Avary also wrote the screenplay for the film version of Silent Hill and will write and direct the upcoming big-screen spin on the Driver games.

Would-be challengers must submit proof of negative reviews and/or comments via e-mail to info@boll-kg.de. They must also submit to a physical to prove they are a healthy male between 140 and 190 pounds and must sign a waiver saying they will not subsequently ask for fees or residuals following their ringtime with Dr. Boll. In recompense, the winning challengers will be provided hotel rooms in Vancouver, location of the Postal shoot.

There are 268 comments about this story
Load Comments (268)