Majesco has recently launched an official Web site dedicated to Blowout. The side-scrolling third-person action game, which is currently in development at Terminal Reality, will see players assuming the role of a futuristic commando named Major Kane who is on a mission to destroy a swarm of aliens that have taken over a space station.

The Web site launched today contains gameplay information, enemy and weapon profiles, galleries of screenshots and concept art, a trailer with in-game footage, and a downloads area. For more information on Blowout, which is currently scheduled for release in October, check out our previous coverage of the PC, PS2, and Xbox versions of the game. 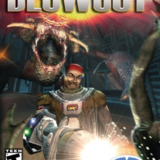