BloodRayne, others confirmed for Playboy spread

Majesco's half-vampire will appear with several other notable female game characters in the October issue of the men's magazine.

Playboy magazine has confirmed to CNN/Money that last week's rumor about game character BloodRayne posing topless in an October spread is--as reported--not bogus. The half-vampire vixen from the Majesco action game series will appear alongside several other female game characters in a computer-graphics spread in the October issue of the adult magazine.

While Majesco describes the features as "smokin' hot" and assures fans that she "does not disappoint," other publishers were eager for the exposure but unwilling to show their franchise icons in the buff, lest they offend the games' audiences. As a result, Leisure Suit Larry's party girl Luba Licious will be the only character besides BloodRayne to be less-than-fully clothed. Nevertheless, the issue will still only be available to those 18 or older when it hits newsstands in early September. 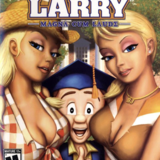