Bloodborne Influenced The Design Of One Of 2019's Best Indie Games

This year's Neo Cab is one of the more intriguing indies in a year chock-full of fascinating games designed by smaller studios. The developer behind the game, Chance Agency, took influence from other sources of media when designing the adventure RPG--including Bloodborne.

One of Neo Cab's cooler features is the Feelgrid, which allows you to get a vague approximation of main character Lina's feelings and mental state through colors. You can try to gauge how Lina is feeling based on her Feelgrid and then use different dialogue options to encourage her emotional and mental state to change--unlocking certain conversation options and locking others. Depending on how you play, Lina can approach certain aspects of Neo Cab's in-game world very differently, and just because she's happy does not necessarily mean you'll have better choices. This system is loosely based on the same risk vs. reward nature of Insight in Bloodborne.

Now Playing: Neo Cab Puts You On A Cyberpunk Adventure As An Uber Driver | E3 2018

"I loved that [Bloodborne had] this in-game currency called Insight, which was a number that went up, and so people would tend to hoard it," Chance Agency creative director Patrick Ewing said, according to USG. "Narratively, it represents your awareness of the cosmic horror of the universe. So if you don't spend it--if you let it keep growing--the world gets corrupted around you … My inspiration from Bloodborne was the idea that sometimes, character attributes can be good in some contexts and really bad in others."

"Early on, we had two separate attributes that could be positive or negative," Ewing continued. He explained that, originally, Lina had "Faith," which represented her overall faith in humanity, and "Energy," which informed you about her physical well-being.

"Essentially, we just adapted that system we had before--which was Energy and Faith--into this cohesive 2D map," Ewing said. "It really felt like, as soon as we got that, it was like 'Oh, it all makes sense, we can write dialogue for this full spectrum of emotions and let the player's imagination fill in specific gaps.' The game is telling you Lina is this red, she's this far away from the edge, but you as the player get to decide, like, is she angry? Is she scared? Is she anxious? The red spectrum can catch all of those things."

In GameSpot's Neo Cab review, James O'Connor writes, "Neo Cab might suffer from inconsistencies and presentation issues in some places, but as a depiction of a near-future society corrupted by tech fetishization, and an exploration of how humans are adapting to automation and the rise of the gig economy, it's got plenty to say about how important it is that we all look out for one another. This is a forward-thinking game, but the issues it explores are extremely relevant in 2019, which makes for an engaging, stimulating narrative experience, even if the central mystery of your friend's disappearance is not particularly interesting." 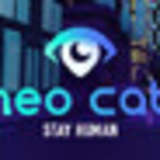