Will the popular PlayStation bloodsucker find eternal life on the PC?

Those familiar with Blood Omen: Legacy of Kain for the Sony PlayStation know that it's quite possibly the darkest, most despairing action adventure game of all time. Luckily for those not equipped with Sony's machine, this summer Kain's going to spread his good cheer beyond the console confines and onto Windows 95. In the classic Legend of Zelda tradition, this overhead-perspective game takes antihero Kain through the vast world of Nosgoth as he slays countless opponents, hones his battle prowess, discovers powerful artifacts, and learns dreadful secrets. Kain's lengthy journey spans about 50 game hours' worth of action, so you'll be pleased to know that he keeps tallies on the body count to save you the trouble.

You see, Kain's not quite himself. One dark night, he leaves an unfamiliar tavern only to be assaulted and brutally murdered by a pack of rogues. Awakened in the very bowels of hell, the furious Kain accepts an offer to seek vengeance from beyond the grave. Stripped of his mortal pigmentation, the once-noble Kain is reborn in Nosgoth, reborn with a thirst for justice - and blood. Embittered by his cruel fate, Kain laughs coldly when he slays his victims and does not hesitate to vanquish defenseless townspeople, if only to satiate his lust for blood. You'd be bitter, too.

His vampiric nature yields Kain certain benefits, as well as a few notable weaknesses. He can absorb considerable physical damage, and his wounds are easily cured via a good old drink of the red stuff. Kain's a real pro where drinking blood's concerned, by the way; simply by focusing his mental powers on a victim, he can drain its blood from about ten paces. He's a mean swordsman, though he's adversely affected by various weather conditions. The light of day will slow and weaken him, while night empowers him. Likewise, rain or water of any kind is bad news for the vampire. He'll tell you all about himself over the course of the game via brilliantly acted voice-overs. Though Blood Omen: Legacy of Kain doesn't feature any big name actors, the pros who were cast to play the starring roles are believable and totally topnotch.

Kain's ultimate goal is only peace of mind. He's not interested in saving the world, but he just might have to in order to die properly. You must guide him through Nosgoth in his attempt to unravel the greater purpose of his murderers, all the while tracking down superior weapons and armor as well as special items and magical spells. Kain will master several polymorphs over the course of his journey; he may shapeshift into a werewolf and leap across chasms the humanoid Kain could not cross otherwise; he can boil into a dark vapor, allowing him to seep through doorways and more; and naturally, he may assume the form of a bat, which allows him to quickly fly to locations he's already visited. But his powers have their price. For instance, his flame sword is among his strongest offensive weapons, but its victims are charred to a crisp so that he cannot feed off their blood. In turn, his double axes are fast and brutal, but he cannot equip a secondary item while wielding them.

The overhead action adventure genre is all but nonexistent on the PC platform, and if nothing else Blood Omen: Legacy of Kain will fill a conspicuous void. Come summertime, role-playing fans looking for a little gloom to go with their hack-and-slash action will surely find plenty to sink their teeth into with Legacy of Kain. 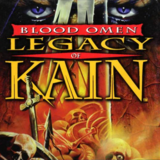