Check out the final installment in our exclusive designer dairies.

By Paul Cazarez and Dellekamp Siefert

When I first started on the Blood Omen project, I was assigned to the design--or redesign--of the Smuggler's Den. At the time, the level was sort of a mess; the player could see from the start of the level to the end, which was a terror on the frame rate, and the level had to be "cut" up into smaller regions so that it could stream from the disk and fit into memory. It was a challenge to find the right areas to cut so that the player would never be able to notice when the region loaded or unloaded. In the end of the process, I thought we did a great job in masking these background tasks--that way, the player never felt that the game was loading in awkward places.

In designing the Smuggler's Den, we had a quite a few restrictions because it was the second level of the game. For one, Kain had only two dark gifts, mist and fury. We wanted to teach the player to use these two gifts, since they were frequently used in the rest of the game. Another restriction was that the level was the smallest of all the levels, so we wanted the player to backtrack a little bit in a few places in the level--that way, he or she did not just blast through the level not enjoy the great scenery that Kain travels through. After the first establishing shot of the level, that first puzzle of the area is a good example of having to backtrack a bit so that the player is not running past everything and not seeing that part of the level. After passing through that puzzle, we thought the next area would be great for a small fight arena or another place to use stealth. The player has two choices here, to either come in with guns blaring or to use the stealth approach and kill both thieves without having to encounter either in battle. So having these restrictions was a good rule set for designing parts of a level.

Once all the puzzles were ideally fleshed out and once we had a good idea where and when to put them, it was time to script them and place them in the level for the player to interact with. Some of the puzzles needed a lengthy time to complete in some areas so that the next region had sufficient time to load, and the player would not reach the next area without "breaking" the level. When I was scripting puzzles, for instance, for the most part I always had a keen eye as to when a tester might be able to break the puzzle. But there was always someone who was able to break it! The test department was vital, and we used them as much as we could for insight, as well as help when we needed "fresh eyes" to see the level.

My name is Dellekamp Siefert, and I was one of the designers who worked on Blood Omen 2. I actually came on the project fairly late and was picked up specifically to help flesh out the boss fights. It is always interesting to see a project in mid-development, and I was challenged to see how I could help them improve an already intriguing game.

With the boss fights, I had the opportunity to focus on a small part of the game. We knew that we had to use these fights as testing grounds for skills that the player has learned. Throughout the game, Kain acquires dark gifts by defeating each boss. These gifts are enhancements of Kain's already formidable skills. Some gifts manifest as puzzle or manipulation skills--charm and telekinesis qualify as these types of skills. Others are more combat skills--berserk, fury, and immolate. The last couple has aspects of both--superjump and mist form.

While I won't go into too much detail about what they do, it was important for us to emphasize these skills during the boss fights since we would be ramping the player's challenges using these abilities. Boss fights were a good choke point for creating challenges associated with these skills. One example of this happens during the first boss fight. In mist form, Kain is invisible and able to perform brutal sneak attacks on his victims. While this in itself is fun, we wanted to create gameplay that also benefited from this gift rather than it just being a gratuitous exhibition of Kain's power. So the first boss, a skittish guy named Faustus, attempts to keep his distance and attack with bombs. The player must use Kain's mist form to close in on the boss and deliver devastating attacks that he would be unable to achieve otherwise.

The personality of the bosses was also an important aspect we wished to convey through the boss fights. It turns out that Kain has a history with each of the bosses he encounters. As revealed through the story, betrayal and revenge run rampant in the world of Nosgoth. Kain's confrontations with these bosses reveal much about his self-serving nature and the villainy of his rivals. Hey, in Kain's defense, you'd be aggro too if you found that your closest advisors and confidants betrayed you. Et tu...

Boss fights allowed us to control the environment and create unique stages that were compatible with these skills tests. We were able to create the giant turbines, grandiose cathedrals, and swirling vortexes that give a grand scale to these fights. The artists and programmers who contributed to this were great. They worked hand in hand with the new guy to create environments and situations well-deserving of a vampire epic. I am impressed with how much we were able to achieve in the relatively short time that I was on the project.

While it was a challenge learning a new tool, I think the power of it allowed me to create some pretty unique situations. I have never had so much control of the AI--with time, it felt that we could have achieved almost anything. I can say that it has been a crash course in intensive scripting, but I think the results are thrilling. 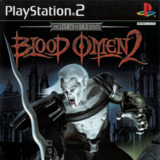